About one million people will participate in the “Tokyo Koenji Awaodori Festival” over the course of two days. The festival originated in the “Koenji Baka Odori” of 1957, which was planned as a promotional measure by the nearby shopping districts. At that time, the festival had nothing to do with Awaodori. People just danced by imitating each other as best they could. However, around 1960, we began to pursue real dancing by knocking on the door of the Tokushima People’s Association in the Kiba area of Koto ward in Tokyo. In 1977, at the 21st festival, the “Koenji Association for the Promotion of Awaodori” was established. The event had grown bigger than the framework of a shopping district promotional event, and had evolved into the realm of performing art, with people competing over technique and attractiveness. By 2005, the Association was formally recognized as a non-profit organization (non-profit corporation), and from 2007, a volunteer organization was set up as well. 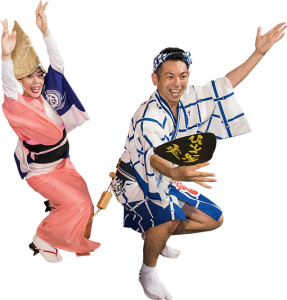 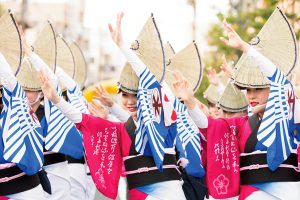